China’s crude steel output rose in late February in line with an improvement in steel margins as post-Lunar New Year domestic construction activity ramped up — contributing to a build-up of steel inventories that is likely to pressure Chinese hot-rolled coil and rebar prices in March, according to S&P Global Platts Analytics.

The government of the steelmaking hub of Tangshan city in Hebei province ordered industrial activity to be wound back to improve air quality during key national government meetings in Beijing that began March 4. This includes the temporary closure of seven blast furnaces in the city in March.

However, S&P Global Platts Analytics does not expect the output reduction to have any material impact on overall production levels, as it will affect less than 4 million mt of capacity. Platts Analytics also forecasts China’s overall pig iron capacity will increase about 11 million mt/year, or 30,000 mt/day, in the first half of 2021, due to the commissioning of new blast furnaces.

More worrisome is the pace of steel inventory build. As steel mills typically continue to operate over the Lunar New Year holidays while downstream demand slows, it is natural for stocks to rise. Market inventories of key steel products in 20 cities monitored by CISA reached 16.95 million mt at the end of February, up 14.6% from mid-February but more significantly up 132% from the start of the year.

Chinese mills and traders were able to manage high inventories in the wake of the lockdown in March and April last year as credit conditions were loosened to help restore the economy. But credit conditions have been subsequently tightened, therefore traders will need to sell to generate cash flow.

The two leading manufacturing purchasing managers’ indices both weakened in February, with the National Bureau of Statistics saying activity had fallen to a nine-month low, while export orders had fallen. The Caixin PMI recorded its weakest headline number since May last year. Platts Analytics estimates that steel demand from passenger vehicles could rise by 6% year on year in 2021, while demand from white goods and appliances was likely to be relatively stable over the same period.

Domestic HRC margins turned negative before the Lunar New Year holidays for the first time in 12 months before rising again to reach $50.27/mt on March 4, according to Platts data. Rebar margins have also recovered but tend to be volatile given the influence of Shanghai rebar futures. Rebar margins were negative for much of January and early February, but were positive at $27.47/mt on March 4.

This is despite high raw materials prices eating into profit margins. Imports of premium low-vol coking coal on a CFR China basis averaged $220.86/mt in February, the highest level since early 2018. This is due largely to China’s nominal “ban” on Australian imports, under which it continues to land some cargoes but not clear them at customs. High import prices have seen Chinese mills increasingly turn back to domestic material. 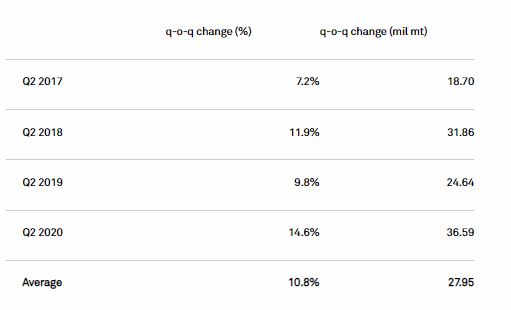 Seaborne iron ore prices have risen by 7.5% since the holidays, with the Platts 62% Fe fines IODEX hitting a near-decade high of $178.45/mt CFR China on March 4.

Q1 iron ore shipments are typically the lowest of the year because of seasonal wet weather impacting operations in Australia and Brazil. Platts cFlow data shows exports started to recover in the last week of February, with combined volumes from Rio Tinto, BHP, Vale, Fortescue Metals Group and Roy Hill – as well as from Saldanha port in South Africa – rising by 2.6% week on week to 21.74 million mt over Feb. 21-28.

The quarter-on-quarter iron ore export increase in Q2 has averaged 11% over the past four years, cFlow data shows. This equates to an additional 28 million mt on average in Q2 than in Q1. A lift in Q2 exports this year will help ease some iron ore supply concerns, particularly if steel output remains relatively flat. This could see iron ore prices come down from their current elevated levels.

Source : Platts
This download is for SEAISI member only.
Please login or register with SEAISI