In December 2018, a Meros off-gas cleaning plant supplied by Primetals Technologies was started up at sinter plant No. 3 of Turkish steel producer Karabük Demir Celik Sanayi ve Ticaret A.S. (Kardemir), followed by the Meros plants supplied for Kardemir´s sinter plants No. 1 early February and No. 2 in in early March. Each Meros plant is able to treat 400,000 Nm³/h of sinter off-gas, reducing SOx by more than 90% as well as delivering extremely low dust emissions. All the three Meros plants are using sodium bicarbonate as desulphurization agent. The projects were realized within a very short time span. For example, only ten and half months were required from the technical specification of the Meros plant installed at sinter plant No. 3 until start-up. With the new Meros plants, air quality in the valley of Karabük is improved considerably.

Kardemir operates an integrated iron and steel works in Karabük, in the northern part of Turkey. The production site is located in a narrow valley, close to the city of Safranbolu. Three sinter plants are operated by Kardemir. Kardemir´s Meros plants represent the fourth implementation of sodium bicarbonate desulphurization, following voestalpine Stahl in Austria, Masteel in China and JFE in Japan.  Primetals Technologies was responsible for the engineering, supply of key equipment like sodium bicarbonate dosing and milling, filter heads, bags, cages, electrics and automation as well as for advisory services for cold and hot commissioning.

In general , Meros process involves several modules for injecting and finely distributing adsorption and desulfurizing agents, such as activated carbon and sodium bicarbonate, into the off-gas flow. This efficiently binds and removes heavy metals, harmful and hazardous organic components, as well as sulfur dioxide and other acidic gases. The use of sodium bicarbonate to reduce the amount of sulfur dioxide also eliminates the need for a conditioning reactor. The dust particles are deposited in a specially developed, energy-efficient bag filter and is recycled back into the flow of off-gas to further optimize the efficiency and cost-effectiveness of the gas purification process. Any remaining unutilized additives are then once more in contact with the off-gas, so that they are finally almost completely utilized. There is also considerably less discharged residue when sodium bicarbonate is used instead of slaked lime. The process automation system ensures stable operation, even when there are considerable fluctuations in the volume and composition of the off-gas. Emission limits can therefore be observed at all times. Thanks to the modular design of the Meros system, a tailor-made solution based on the environmental restriction can be provided, with possible upgrades of the system by subsequent installation of required modules.

MEROS is a registered trade mark of Primetals Technologies in certain countries. 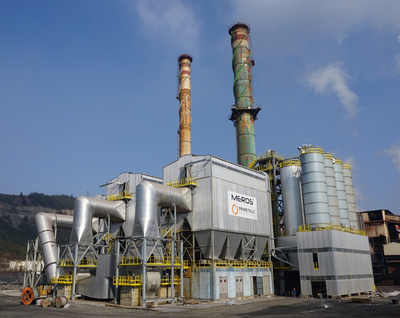