Primetals Technologies will supply an Arvedi ESP (Endless Strip Production) line to United States Steel Corporation (U. S. Steel) for its Edgar Thomson Plant at Braddock, Pennsylvania production location. This will be the first ESP line to be constructed in the US. The casting-rolling plant has a rated capacity of 2.5 million metric tons  (2.76 million short tons) of high-quality, ultra-thin strip. With a maximum strip width of 1,956 mm (77”), it will be the widest ESP line ever built.

The Arvedi ESP line is designed to produce strip with thickness between 0.8 mm (0.031”)  and 6 mm (0.236”) in a width range from 965 (38”) to 1956 mm (77”). Primetals Technologies is responsible for the engineering of the Arvedi ESP plant and will supply mechanical equipment, media-control systems, technological packages and automation systems. The entire line is controlled by a completely integrated basic (Level 1) and process optimization (Level 2) automation, which fully controls all casting and rolling operations. Level 3 automation is also included in the scope of supply as well as the power supply transformers and substation. For coil transport, a modular shuttle car will be provided.

With this investment, Mon Valley Works will become the principal source of substrate for the production of the company’s industry-leading XG3™ Advanced High Strength Steel (AHSS) that assists automotive customers in meeting fuel efficiency standards. This project, in addition to producing sustainable AHSS, will improve environmental performance, energy conservation and reduce our carbon footprint associated with Mon Valley Works. First coil production is expected in 2022, contingent upon permitting and construction.

Founded in 1901, United States Steel Corporation is an integrated steel producer with major production operations in the United States and Central Europe. Headquartered in Pittsburgh, Pa., the company manufactures a wide range of value-added steel sheet and tubular products for the automotive, appliance, container, industrial machinery, construction, and oil and gas industries.

The Edgar Thomson Plant in Braddock, Pennsylvania as part of U. S. Steel´s Mon Valley Works is an integrated steelmaking operation that also includes three other separate facilities with a total annual raw steel production capability of 2.9 million tons. It is located about 10 miles southeast of Pittsburgh and is where basic steel production takes place at Mon Valley Works. The facility operates two blast furnaces, two BOF converters, vacuum degassing and ladle metallurgy facilities and a dual-strand continuous slab caster. Slabs are further processed in another facility of Mon Valley Works.

In the Arvedi ESP process, hot-rolled coils are produced in a linked casting and rolling plant directly from liquid steel in a continuous and uninterrupted manufacturing process. The line commences with the casting of a thin strand that is subsequently rolled to an intermediate thickness of 10 to 20 mm in a 3-stand high-reduction mill positioned at the end of the caster. After reheating in an induction heater, rolling of the transfer bar to the targeted end thickness is performed in a 5-stand finishing mill followed by laminar strip cooling. Strip cutting is then carried out by means of a high-speed shear immediately prior to coiling. The full range of steel grades can be flexibly produced on Arvedi ESP plants.

Mills of this type have an energy consumption and associated costs up to 45 percent lower than those of conventional mills with separate casting and rolling processes. They also have substantially reduced CO2 emissions. Furthermore, the dimensions of these mills, with a length of in this case only 180 meters, are considerably more compact than those of conventional casting and rolling mills. 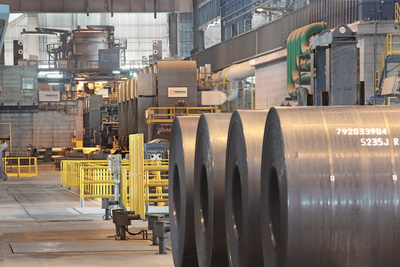